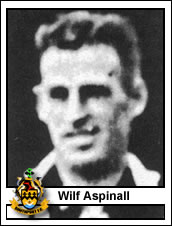 The only Southport player to be born in the U.S.A., Wilf was really a native Cumbrian whose mother brought him over on holiday aged 3 and became stranded by the war. When his father died shortly afterwards in the U.S.A. she was left in Frizington to raise two young sons on her own. An all-round sportsman (he excelled at cricket and tennis) Wilf s football suffered as a result of a bout of rheumatic fever at 14. Variously described as 'bustling' and 'lacking finesse' he nevertheless attracted Sheffield Wednesday's attention when, as a Workington youngster, he was signed for a Ł400 fee. Allowed to return to Workington, he became a member of their North Eastern League side which eliminated Southport from the F.A. Cup in Nov. 1933 and progressed to Round Four — further than the 'Reds' ever went as a Football League Club! Largely confined to the Lancashire Combination at Haig Avenue, his one other F.L. appearance was for Stockport County when he scored his only F.L. goal in a 2-1 win at Carlisle on 9 March 193 5. He worked for many years at Ford's in Dagenham until returning north after his marriage in 1952. He collapsed at home and died in the West Cumberland Hospital of rheumatic stenosis of the heart aged so.