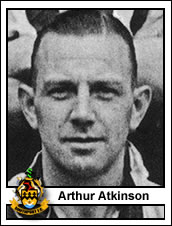 Originally an outside-right who represented Goole Town and Yorkshire County Schoolboys between 1922 and 1924, he developed as an industrious inside-forward whose foraging did a lot to help Joe Patrick. He had his best spell at Mansfield where he missed just 6 League games out of 126 in 3 seasons and scored 31 goals. It was with the 'Stags' that he broke into prominence, making many of Ted Harstori's 55 goals in 1936-37. He had scored at Mansfield v. Southport in 1936-37 and provided the pass for the 'Stags' to open the score in the return match. He left Southport to take a job at Thorne Colliery and play for the team there in the Yorkshire League, eventually becoming Secretary. He had a shop at Goole for 15 years or so, retiring early because of angina. He died at his home of a heart attack before the ambulance arrived.

If you can provide any further information please contact me
Season: 1937/1938 [Back to Player Stats]
The player made an appearance in the following games: