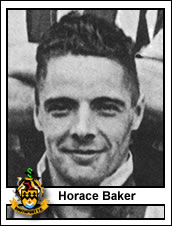 One of 5 footballing sons of a former Fenton Town player, his youngest brother, Frank, played First Division soccer for Stoke City either side of the war. At Port Vale Horace scored 60 goals (mostly in the Reserves) in 2 seasons and got 30 goals in the Birmingham League for Shrewsbury Town from outside-right. He impressed Gordon Hunt when he saw him play for Shrewsbury while on Tranmere Rovers' retained list at a fee which Southport could not afford. He was signed by Southport after the fee was removed; he missed a penalty on his debut for Southport Reserves in the opening game of the season but scored 2 goals with rasping first-time shots in the next match v. South Liverpool. He also scored on his League home debut v. Accrington Stanley when he was described as doing `nothing extraordinary in midfield but there is no doubt he takes up correct positions near goal'. He lost his place after the 5-0 defeat at Crewe to the newly-arrived Albert Stapleton. Prior to his war-time call-up he was working as a bus conductor. He was working as a spot-welder and had suffered from chest problems when he died in his sleep from a heart attack.