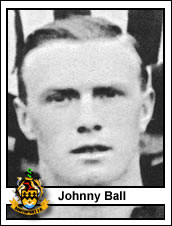 One of the truly great characters Southport produced, Ball's career did not develop until after he left Haig Avenue. Yet as a teenager he scored a hat-trick v. Wigan Borough and he proved his adaptability in his last match for the club by playing at full-back, having also appeared in goal in a Mid-week League match. It was when he went to Chorley where he scored goals galore (including 58 in one season) and collected two Lancashire Combination Championship medals that he was spotted by Louis Rocca for Manchester United. He was a marvellous header of the ball and a hard man — once returning to head a goal with 5 stitches in a cut over his eye! He scored twice at Hillsborough and impressed Wednesday. When he joined them he scored in 12 of his first 14 games including 4 v. Wolves; altogether he scored 90 goals in 132 League games for the Owls, including 33 goals in 1932-33. His run of 1 i successful spot-kicks that season was only eclipsed some 3o years later by Franny Lee. He was badly kicked about playing in France which virtually ended his career. He worked at Vauxhall (Luton) for many years and later divided his time between working at a manufacturing chemists and working privately as a masseur. He was found dead at home one lunchtime by his wife. (N.B. After leaving Southport he was always known as Jack Ball.) 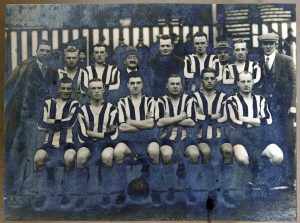