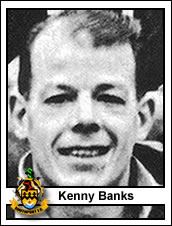 He was to have signed for Bolton Wanderers but a mistake over his address caused him to miss the date of the trial that he was offered. He never looked back after Southport gave him a trial against Liverpool at inside-left in a Wartime League match. He developed into a wing-half, tenacious in the tackle and a non-stop worker throughout every 90 minutes. He was a modest man of few words who was always ready to augment the attack as a sixth forward. He had the rare distinction of sharing a goal with Alan Ball against Barrow in 1948 when both players kicked the ball simultaneously into the net. Characteristically the unassuming Banks waived his claim to the goal and it stands credited to Ball. An ideal clubman he was granted a benefit against Bolton Wanderers in 1950. He only went full-time between 1950-52 after concluding his apprenticeship as a fitter and in 1951-52 he came back to play 26 Football League games after the 2 previous years were spent almost entirely in the Reserves. He gave Wigan Athletic splendid service making 183 Lancashire Combination appearances. He was associated with the latics as a trainer for more than 20 years, only leaving his home town to live near his daughter in Colwyn Bay when ill-health overtook him.