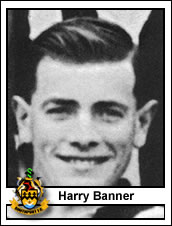 A nephew of Sam Banner, the long serving director of Southport Football Club, Harry was a real stalwart of local soccer, winning a Southport and District League Championship medal with Crossens as well as Colonel White and Victory Cup winners medals. When deputising for George Jones in the League side he only experienced defeat once (at Crewe) - no fewer than 6 of his 9 games were won. After 3 seasons with Burscough Rangers he dropped out of football for a while becoming a permit player with Fleetwood Hesketh in his native Marshside and was still going strong there early in the war having been the captain (and the comedian) of the team. He died suddenly and alone at his home in Lytham Road when only 58.