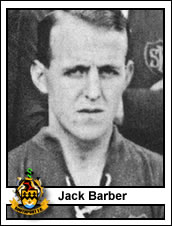 An extremely astute, capable and ambitious personality who knew what he wanted from both football and from work. He came from a very sporting family and was reserve for the England Schoolboys side at 13. After playing wing three-quarter for Salford Rugby League team as a i6-year-old and serving in the Royal Flying Corps, Jack Barber joined Manchester United where his opportunities were strictly limited. He and Jack Sambrook scored 31 of Southport's 59 goals in 1924-25 but the following season he was dogged by injury and had a cartilage operation in October which kept him out almost 5 months. At Halifax he was at odds with the manager. He switched to half-back and made 142 appearances for Rochdale in 4 seasons. After his League career he spent 6 terms at Bacup where he was captain for 5 years and was also Secretary in 1938-39 when working in joinery and building construction for Bacup Council. Later he studied engineering and became a Mill Engineer for the Joshua Hoyle Group. A heavy smoker most of his life, he died of cancer during a second operation to clear a blockage of the lungs at the age of 60. 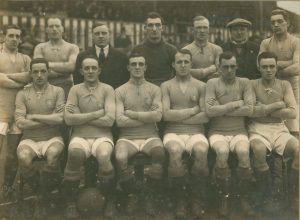