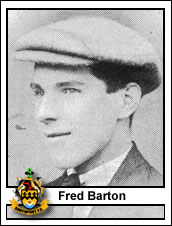 One of 13 locally born players to turn out for Southport in their opening season in the Third Division North, he was a product of the Southport and District League, where he played first at centre-half and later at left-half At Bury he played regularly in their Central League team. On signing for Southport he appeared in the reserves but experienced bad luck with injuries. He was described in the Southport Guardian as being `a very industrious player, never slackening throughout the whole 90 minutes and covers the ground with remarkable speed'. Cartilage trouble forced him to retire from the game 3 months short of his 23rd birthday. Originally an electrician, he spent most of his working life as a commercial traveller for a wholesale provisions firm, whilst his recreation was bowling. He died very suddenly of angina after a day at work. His son Peter played in goal for Southport Reserves shortly after the war.