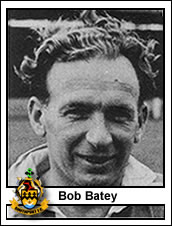 He joined Carlisle United from Greenhead South Tyne Rangers as a
centre-half but it was as a wing-half with Preston North End that he
developed, winning an F.A. Cup Winners medal with George Mutch
(g. v.) in 1938 and making III peace-time League appearances. At Preston
he was described by one critic writing in 1936 as possessing 'all the
attributes of a good player. He controls skilfully, passes well and is sturdy
in defence'. He twice guested for Southport during the war and when
demobilised from the R.A.F. he was signed by Leeds United for whom
he made 8 First Division appearances. At Haig Avenue he played 13 games
at centre-half and 16 at left-half. On leaving Southport he became
Player/Coach in the North East before returning to Lancashire to work
for Leyland Motors until his retirement in 1977. He died in hospital after a series of heart attacks.