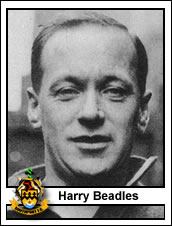 Initially employed by a furriers in Newtown, Montgomeryshire, he served with distinction in the Royal Welch Regiment in WWI and returned to settle in Liverpool. He played inside-left in the Cardiff City team that was beaten 1-0 by Sheffield United in the /1925 F.A. Cup final and also gained 2 International caps. Although he joined Southport late on in his career, Harry Beadles was top goalscorer during each of his 3 seasons with Southport. He was one of the best headers of a ball to wear the club's colours. He helped to bring about the downfall of First Division Blackburn Rovers in the F.A. Cup when his header from a George Jones cross opened the scoring. His 61 League goals place him fourth in the all-time list. He scored 3 goals in his last League game — a 6-2 victory over Hartlepools United. While at Southport he ran his own sports outfitters in Liverpool and later was for many years the licensee of a hotel in Liverpool. Ill-health brought about his early retirement and he moved to Mold where he died aged 60.