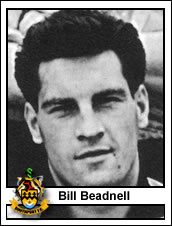 Bustling Bill Beadnell joined Southport with Tom Richardson after a couple of seasons with Middlesbrough. A part-time professional, he trained at Roker Park and only met his team mates on match days. Educated at Bede Grammar School, he had represented both Sunderland and Durham County Schoolboys. His attributes were his speed � he had won the Morpeth Handicap Sprint in 1953 � tremendous spirit, a fine physique and considerable nuisance value. He took much of the weight off George Bromilow with whom he struck up a good partnership. Although retained right up to 1959, he did not appear for the club owing to duodenal ulcer problems. His forceful style was badly missed, especially by the fans who eagerly awaited his return. In 1958-59 he was reported to be turning out for Ashington and he later played Rugby Union for Old Bedeans. Now a successful businessman, he has his own transport business in the North East.