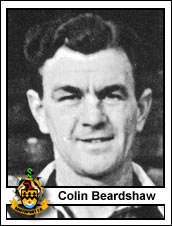 He was an experienced player who played 12 games for Gateshead as an amateur, 18 at Stockport and was an ever-present at Bradford City in 1938-39 before volunteering for the R.A.F. He played in both the North and South of Ireland as well as in the Midland League and after being out of League Football for almost nine and a half years he was recommended to Southport by Mr J. J. Commins who had been Cork United's manager prior to their disbanding in October 1948. He made his first team debut a mere 24 hours or so after stepping off the boat from Dublin aged almost 36 and was centre-half in a side which had a bad time and he lost his place. He was recalled for the F.A. Cup-tie against York City and was signed on for the season after the expiration of his 2 month trial period. A clean, thoughtful full-back who lacked only speed, he played in every Football League game in the calendar year 1949. He worked for British Railways on retiring from the game but retained his connection with the club in an honorary capacity as a scout besides working behind the scenes on match day, before eventually being sacked by Billy Bingham.