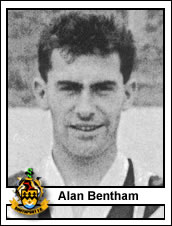 An outstanding schoolboy footballer, he represented England Schoolboys
against Wales, Ireland, Scotland and Germany. Although he signed for
Liverpool on leaving school he never played for them, turning out for
Flint Town Reserves instead. Though he played in Everton\'s Reserve
team, it was Southport who gave him his chance in League football. After
two games at left-back � the position he preferred � he shared the
right-back duties with Fred Leeder to accommodate Bryan Griffiths.
Although he played in the opening game of the 1961-62 season he only
appeared in two other League matches late in the season. He also played
at left-half at Barnsley in a Football League Cup-tie. He scored one of
the all-time freak goals at Haig Avenue. From just inside the Southport
half he lofted a free kick into the Gillingham goalmouth. The visiting \'keeper had come out too
far and the ball sailed over his head to bounce into the net. He has been in poor health recently.

If you can provide any further information please contact me
Season: 1961/1962 [Back to Player Stats]
The player made an appearance in the following games: