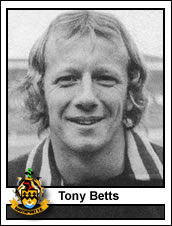 Though born over the border in Derbyshire, he was really a Nottinghamshire man. As a schoolboy he played scrum-half for Derbyshire County RU. He was a member of Villa's youth team which competed in the 1971-72 F.A. Youth Cup but he got few chances at Aston Villa — just one full League appearance and three as substitute, the last of which was in front of 55,615 spectators at Old Trafford. In contrast, five weeks later he made his Southport debut in front of a mere 2,998 spectators at Bradford City. At the end of his two month loan period he returned to Villa after manager Alan Ball refused to pay J2, 50o for him. He finished his career in the United States and lives near Portland, Oregon where he coaches youngsters in school and in the Oregon state youth teams whilst working in the sports equipment business. Surgery following a knee injury in 1982 terminated his career.