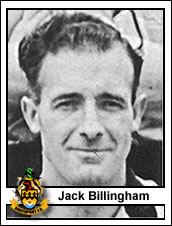 He started his League career with Northampton Town, later moving on to Bristol City where he made only ten League appearances before being transferred to Burnley. Before and after the war he gave the Turf Moor club good service chiefly as a centre-forward, being 12th man at the 1947 Cup-final. From Burnley, Billingham went on to Carlisle United where he scored frequently and also demonstrated great versatility. Starting at centre-forward he also did splendid work at wing-half, inside-forward and even centre-half on occasion. His craftsmanship, ball control and positional sense played a vital part in Southport's successful 1952-53 season when, at 38, he notched a club record is goals from the wing. He gave Southport full value for the fee of around Ł500 and achieved his ambition of playing beyond his 40th birthday. A man of great equanimity, he gave invaluable assistance to his younger colleagues, who held him in great respect. In later life he returned to Daventry to work for the BBC as a maintenance engineer on the transmission masts for the World Service. He was not long retired when he died following a heart attack.

If you can provide any further information please contact me
Season: 1951/1952 [Back to Player Stats]
The player made an appearance in the following games: