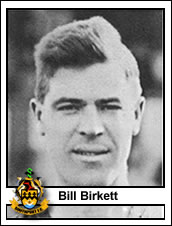 He had two seasons at Carlisle, making 13 appearances, before joining Southport. He did not maintain the promise he showed in the second half of 1932-33 and the following season he spent long periods in the Reserves, being displaced by Jack Grainger. After being freed by Southport he joined Rotherham. An early accident there put him out for six months after his knee was trodden on but he made a full recovery and gave Rotherham United five good seasons' service making 172 Northern Section appearances — one of a number of former Southport players who served the Millers in the 193os. He stayed on in Rotherham after the war and was still working as a furnaceman in the steelworks when he was killed in an industrial accident, a wagon crushing him against a wall.