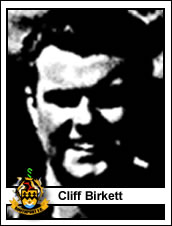 He joined Manchester United straight from school having represented Newton-le-Willows Schoolboys and won 8 England Schoolboy International Caps in 1948-49. He came from a family of footballers - his brothers Ronnie (New Brighton, Accrington Stanley and Oldham Athletic) and Wilf (q.v.) were professionals. At Old Trafford he had a spell in the first team following the transfer of Jimmy Delaney, making his debut when just 17. He packed a hard shot and was always lively but carried a bit too much weight and did not last the pace. He joined Southport while doing National Service at Catterick which impeded his progress. Granted a free transfer at the end of the season he joined Crompton Recs in the Manchester League, working for a hinge and lock makers in Ashton, later signing up for Ray Minshull at the newly-formed Wigan Rovers.


If you can provide any further information please contact me
Season: 1956/1957 [Back to Player Stats]
The player made an appearance in the following games: