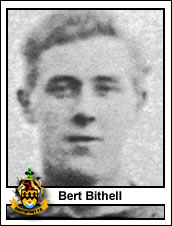 Bert\'s football career opened when he was Is playing for St Philip\'s Old Boys in the Liverpool I Zingari League. Subsequently he played for Crossens from whom he came to Southport. In addition to wearing the Southport colours he also assisted Burscough Rangers and played for them in the Rall-Walker Cup which Burscough won by beating Frodsham on 18 February 1922. He made his Reserve debut against Penwortham and helped his side to a 5�o win. Although Wigan born he lived in Southport from the age of io and attended school in Crossens. He came from a sporting family � his father captained Wigan\'s Rugby League \'A\' team for four years, but Bert lacked the temperament for football; very nervous
on the field, he would never go for a fifty/fifty ball. He had limited opportunity at Southport, his appearances being mainly as a deputy for Billy Semple.