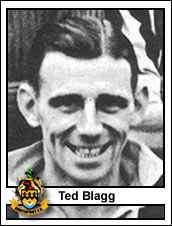 A product of Worksop League football, he got into the Nottingham Forest side during the war and earned the reputation of being a destructive and relentless centre-half He once played at Watford in a Cup-tie with a broken nose and a cut eye, scorning all offers of treatment. He was signed (without having been watched by Southport officials) at a record fee. When the club failed to sign Cushlow from Derby County they moved quickly to get a player who would be eligible for the Cup-ties but the Chairman later admitted that they made a mistake and paid for it. Few of his performances came up to expectations — an exception being the F.A. Cup replay with York City when he played a 'blinder'. A useful club cricketer — a right-hand batsman and right-arm fast medium bowler — he had one first class match with Nottinghamshire in 1948. He continued to play cricket up to S years before he died in hospital of a brain haemorrhage.