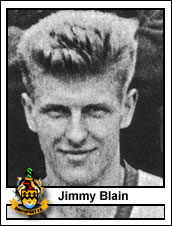 This fair-haired, speedy inside-forward was a talented sporting all-rounder as a schoolboy, representing Liverpool Schoolboys in five different sports including the javelin in which he won a Championship. He made over 500 League appearances after being given his chance in the Football League with Southport. He actually played in the first Football League game he ever saw! Always a danger in the penalty area, he was Southport\'s top scorer with 20 goals in 1961-62 when he was an ever-present and he missed only 2 games while at Southport. Transferred to Rotherham United, his debut at Chelsea was watched by millions on TV. Later he won a Championship medal when Carlisle United gained promotion to the Second Division for the first time. At Exeter he developed into a
utility player turning out in every position except centre-half and goalkeeper before finally settling at full-back; in the course of this career he became only the fifth Exeter player to make over 300 League appearances. He is now a self-employed carpet fitter in Exeter where his family has settled
Season: 1962/1963 [Back to Player Stats]
The player made an appearance in the following games: