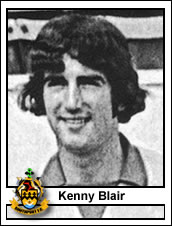 A Northern Ireland Schoolboy International when he was capped against 4Wales at outside-left, he joined Derby County as an apprentice straight from school after a trial in 1969. Playing as a sweeper alongside the centre-half he captained Derby's Reserves in 1972-74. He signed for Halifax Town after a month's trial for a fee in the region of Do,000 but was out of the side with torn ankle ligaments at the start of 1975-76. He suffered a dislocated shoulder whilst on loan with Stockport County and returned injured to Halifax Town. He was signed by Ray Henderson from Halifax along with Tony Rhodes. He left following a disagreement over travelling expenses. He later gave Burton Albion excellent service both as a player (9 seasons and 328 games) and manager (September 1989 to January 1990). After leaving Southport he became a fingerprints and 'scene of crime' photographer for the police, initially in Derbyshire and, for the last few years, in Devon and Cornwall