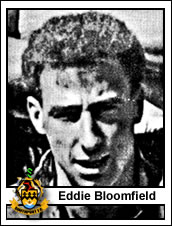 He came to Carlisle United\'s notice while serving there in the Forces. He also played for a Commonwealth team in Korea. On being demobbed in 1952 he joined the Cumbrians, signing full-time 3 years later. It was Grimsby Town trainer Tom Dawson (the father-in-law of Wally Taylor, q.v.) who was instrumental in bringing him to Gordon Hunt\'s attention. He came to Southport on a two months\' trial, making his debut in a 2-I win at his old club. He was retained for the following game v Hartlepools United which resulted in a 6-1 home defeat. It was Southport\'s heaviest home defeat for more than 30 years. He was not retained at the end of his trial but later gave Formby nine seasons\' service up to 1967. He still lives in Woodvale, Southport.