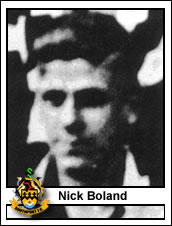 Originally apprenticed as a fitter he had been jobless for 3 years when a Wolves scout spotted him playing at Altrincham for Northwich Vics and signed him for a fee of Ł5o. He came from Wolves in an exchange involving Chris Greene. The Lancashire Daily Post Football Handbook described him as being 'a smart ball manipulator' but he only found his best form when moved from outside to inside-left in the closing games of the 1934-35 season. Initially displaced by Wilf Aspinall in 1935-36 he regained his place only briefly and made only ten more appearances. He subsequently made his home in Southport and by the mid-199os had become the oldest former Southport player living in the town. He is a former Secretary of the Old Links Golf Club.