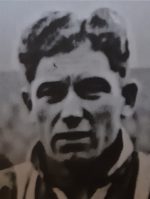 A former butcher’s boy who became a pit worker so he could get Saturday afternoons off to play football, he made his début for Southport Reserves at inside-right and scored three times in four minutes. Three days later he played in the Midweek League and got two goals against Blackburn Rovers. He also scored on his senior début. Having joined the Black Watch in August 1939, he was captured just outside Dunkirk in May 1940 an spent 5 years in a prisoner of war camp in Poland. Sturdy and strong on the ball, he was full of enthusiasm and always looking for goals. He returned to Southport, married a local girl and scored both goals in the first post-war League game v. Darlington. Of his family of eleven, three daughters were married in a triple ceremony. He returned to the pits until retiring and has lived in the Newcastle area since 1953.