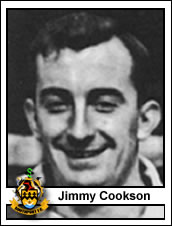 At Everton he played chiefly in the Central League and Liverpool County Combination sides and came to Southport as a wing-half when he wanted to get more involved in the family business. It was not until he was tried at full-back in the Reserves that he found his best position. When Colin Beardshaw was injured Cookson was called up for the Third Round F.A. Cup-tie with Hull City and he did quite well. He was in and out of the side for the rest of the season, but in 1950-51 he became a regular. He got few opportunities once Wally Taylor took over at right-back and quickly made the berth his own. Cookson's only goal was a free-kick against Darlington, struck from the halfway line. He was licensee of the `Tailors Arms' at Ford until 1974 and thereafter became Steward of the Constitutional Club at Seaforth. Latterly he had a history of heart trouble which induced him to take early retirement. He died at home of a heart attack.