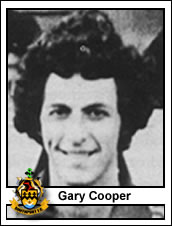 From the Football League Book:
As a centre-forward he appeared in the Cheshire League for his home-town club Horwich RMI when still only is. Discarded after an apprenticeship at Bolton Wanderers, he had a three months\' trial at Oldham under Walter Joyce, whose first signing he was when appointed manager at Rochdale. In 1975-76 he played in the side that took Norwich City to three replays in the fourth round of the F.A. Cup. He joined Southport as a part-timer on trial after being freed by Rochdale. He scored a spectacular goal in the League Cup-tie with Hull City when he hit home a vicious dipping volley from 3o yards. He was signed on for the season, but suffered two ankle injuries which limited his first team opportunities. He did have the honour of scoring Southport\'s very last League goal in their 2200th game.
He re-joined Southport in 1981 and was a regular scorer in their Northern Premier League team notching 21 N.P.L. goals in his first season. He stayed on as a popular crowd-pleaser for two more years, accumulating 103 full N.P.L. appearances. He works at British Aerospace and has tried his luck in the USA in recent years.
Player Profile reproduced with Permission from:
The Sandgrounders: The Complete League History of Southport F. C., by Michael Braham and Geoff Wilde (Palatine Books, 1995). ISBN 978-1-874181-14-9

From The Non-League Book:
Scorer of arguably the greatest goal ever seen at Haig Avenue in the Football League days in the 2-2 draw with Hull City in the League Cup 1977/78 season. Gary made 81 Football League appearances for Rochdale and 13 league appearances (plus 7 as sub) for Southport before returning to the club in the 1981/82 season and going on to make a further 103 starts plus 13 as sub. He netted 46 goals in that time. His hat-trick in the 4-1 win at Marine in the 81/82 season was one of the highlights of his time at the club.
As well as a claim for the greatest ever goal scored at Haig Avenue �Coops� also has the distinction of scoring our last ever Football League goal, one of five Football League goals he netted. His final season was hit by injury with two bad ankle injuries restricting his appearances which was a blow as he showed great promise in every game he played
Started out as a centre forward for his home town club Horwich RMI as a 15 year old.