Skip to content
Player Information Not Yet Complete
Full Name: Frank Curran
Normal Position: Inside Left
Born: 31/05/1917 (Ryton-on-Tyne, Co Durham)
Died: 24/09/1998 (Southport)
Curran, a strong centre-forward who scored consistently in the 3rd Division both sides of World War II, was born into a footballing family. One brother Andrew had played for Blackpool and Accrington Stanley, another James represented Barnsley and Southend United, while a third brother Jack was an England amateur international.
Frank was signed by Southport in August 1935 from Washington Colliery and he scored 3 goals in 16 League games before moving to Accrington Stanley in February 1937 in an exchange deal involving George Pateman. He made his debut for Stanley in a 6-3 victory over his former club, Southport. He did not score in that game but opened his account with two goals in a 3-2 win over Halifax.
He appeared in 34 League games for the club, scoring 14 goals before a move to Bristol Rovers in June 1938. The following season was Frank’s best in football. He scored 21 goals in 27 League games and 1 in 2 F.A. Cup games to easily finish as the club’s top scorer. His tally included 4 against Swindon at Eastville in March 1939. Despite his efforts, Rovers finished bottom of the 3rd Division South and at the end of the season he was sold, along with full-back Alec Millar, to Bristol City for Ł300.
He played in all 3 games, scoring once, in the aborted 1939/40 season. His wartime record was excellent (10 goals in 19 games for City, 9 in 7 for Everton, 8 in 13 for Southport, 5 in 9 for Accrington, 2 in his sole game for Bristol Rovers and a single appearance for Swindon).
In May 1946, with peace time football returning the following season, he re-joined Bristol Rovers. He was to score the club’s first goal on the resumption of League football and played 10 League games for the club that season scoring 3 times. He joined Shrewsbury Town, then in the Midland League, early in 1947 and scored on his debut. In two spells with the Shrews, he managed 7 goals in 16 Midland League games. In between he returned to the Football League by joining Tranmere Rovers in June 1947 and in one season at Prenton he notched 7 goals in 17 League games.
Interestingly Frank joined his last League club - Tranmere, 27 years after his older brother Andrew signed for his first professional club - Sunderland. Frank wound down his career with two spells at Hyde United and spells with Ashton United and Darwen. He retired at the age of 36 and settled in Southport. 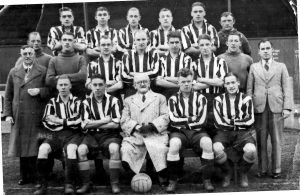