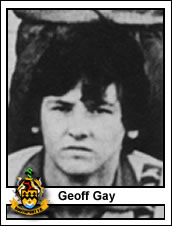 He left Romford when six and spent his next few years in Tarvin and later Winsford. On his Football League debut, whilst on loan to Exeter City, he was booked in the 7th minute and spent the last 30 minutes in goal after the Grecians' goalkeeper was injured. He began as an apprentice with Bolton Wanderers, but it was not until he joined Southport that he got a regular place. When Southport failed to be re-elected he joined Wigan Athletic but only managed to play in their first home Football League match. He was unlucky with injuries, breaking his leg in three places on II December 1982 playing for Macclesfield v. Witton Albion. His leg needed a metal plate inserting and he broke it again while with Chorley. He became a Civil Servant working for the Employment Department in Horwich and later in Westhoughton.