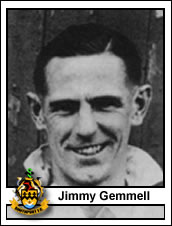 Robust and dour, this long-kicking defender joined Southport as player- coach after Bury agreed to give him a free transfer. He gave the Shakers grand service after joining them as an i8-year-old. Between 1934 and 1937 he missed only 3 League games. Gemmell was signed by Southport on a 2 year coaching contract but, with so many part-timers and his frequent requirement in the first team, it was not possible for him to undertake much coaching. He gave up League Football at the end of 1946-47 as he would have required a cartilage operation and he obtained an engineering job in Bury. Later he had a spell on Lincoln City's training staff and for 3 years became Coventry City's assistant trainer. He came from a footballing family. His father was a Sunderland forward and his brother-in-law was Billy Simpson, the Aston Villa and Scottish International. During the war he worked on Wellington and Lancaster aero engines in Coventry; he lived in Birmingham from 195o until his death from a heart attack a few months after his 80th birthday.