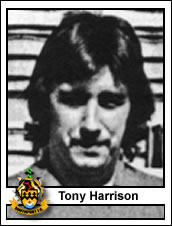 Though he stayed on at Ryhope Grammar School until 18, he had already played first-team games for Boldon for two years. He had been working for the Land Registry when spotted by Brian Watson, scouting in the North East for Ray Henderson. Although he joined a struggling side, he immediately made a considerable impression with his clean handling. The following season he attracted the scouts to Haig Avenue but he had the misfortune to fracture his left arm at Aldershot on 2 January and thereafter missed all but the last three games of the season. Signed by Carlisle United he made the worst possible start, breaking his leg at Netherfield in a pre-season friendly in August 1978. The consistent Trevor Swinburne restricted him to only 8 appearances in four seasons at Brunton Park before he returned to his native North East where he played for a number of non-League sides whilst working for Tyne and Wear and later Gateshead Councils. His final appearance at Haig Avenue came on 29 September 1989 when Whitley Bay won a first round F.A. Trophy tie against Southport. In 1994-95 he was assistant manager of Durham City.