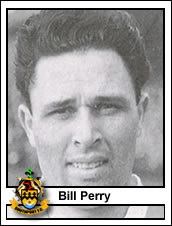 Bill Perry scored the goal which unleashed the most joyous communal celebration British football had ever known.
True, it was trumped by the Geoff Hurst hat-trick which won the World Cup for England 13 years later, but on a sunlit May afternoon in 1953 the Blackpool winger\'s injury-time strike, which secured an FA Cup winner\'s medal for Stanley Matthews in his third final, was in a category of glory entirely of its own.

When the veteran Matthews had been denied at Wembley in 1948 and again in 1951, there was a collective tear in the nation\'s eye.
Now, a month before the conquering of Everest and the crowning of the Queen prompted a double eruption of unrestrained euphoria, the future Sir Stan, the 38-year-old Peter Pan of sport, was back at the famous old stadium for what was surely his last chance at claiming that coveted gong.

With little more than 20 minutes of the contest remaining and Blackpool trailing 3-1 to Bolton Wanderers, another crushing disappointment was in the offing. Cue a dramatic comeback to upstage anything the game\'s most venerable competition had ever witnessed.
With Matthews running amok � admittedly against a tiring side reduced to nine fit men � and Stanley Mortensen completing the only hat-trick in Cup Final history, the Seasiders surged back to 3-3 shortly before the end of normal time.
Then Matthews danced past two weary Wanderers and crossed from the right to Bill Perry, who emblazoned his name indelibly into the annals of sport by shooting low into the net from 12 yards.

Momentous as it was for the 22-year-old South African to be the instrument of triumph in what would be known forever as \"the Matthews Final\", it was inevitable that it would overshadow everything else he achieved throughout a lengthy career.
In fact Perry, who spent more than a decade at Bloomfield Road when Blackpool were one of the most glamorous sides in the land, deserved rather better than that.

In his pomp he was a searingly pacy, formidably muscular goal-scoring flankman, skilled enogh to earn three England caps � he was eligible because his father was a Londoner � and widely deemed unlucky to be discarded after playing his part in two victories and a draw, netting twice in the process.

Perry\'s rise to prominence was remarkable after he had concentrated on rugby union until he was 14, only switching codes when he moved to a soccer-playing school in his native Johannesburg.
Though he was naturally right-footed, the only vacancy in the school team was on the left wing, so he honed his left-foot technique in the time-honoured fashion of the age, by kicking a tennis ball against a wall for countless hours.

It paid off and when he left school at 16 he was recruited by the prestigious Johannesburg Rangers, for whom he performed so impressively that in 1948 he was offered the chance to join Charlton Athletic, then firmly established in the English top flight.

Perry declined that invitation, feeling unready to take such a mammoth step to an alien hemisphere. But a year later when the call came from Blackpool, one of the most fashionable names in football, offering the opportunity of playing in tandem with the incomparable Matthews, he could not resist.
After a brief trial, he accepted a one-year contract with the understanding that the price of his return ticket to South Africa would be covered if he failed. Never did he look like needing it.

Within three months of his recruitment, the 19-year-old Perry made his senior d�but in a 2-1 victory against Manchester United at Old Trafford, earning the admiration of Johnny Carey, his direct opponent and one of the most respected defenders in Europe.

Though dismayed initially by the vivid contrast between the dank Lancashire weather and the sunny climes of home, he overcame a bout of homesickness and claimed a regular left-wing berth for virtually the remainder of the decade, still the most successful years the Seasiders have ever known.

Linking fluently with multi-talented attackers such as Matthews on the opposite wing, the spearhead Mortensen and inside-forwards Ernie Taylor, Allan Brown and Jackie Mudie, the South African dasher became an integral part of an exhilaratingly entertaining unit. He offered an ideal balance to his revered counterpart on the right, specialising in direct, high-speed sprints to the opposition byline, in contrast with Matthews\' far more intricate sorcery.

In 1950/51 Perry and company reached the FA Cup final, in which they lost 2-0 to Newcastle United, and finished third in the First Division, the equivalent of today\'s Premiership.
Two years later came their timeless Wembley masterpiece against Bolton. Then they enjoyed a rousing run of top-half League finishes throughout the 1950s, except in 1954/55.
In that term, unaccountably, essentially the same group of players flirted perplexingly with relegation, and one of the principal reasons they escaped was a Perry hat-trick in an astonishing 6-1 away win over high-riding Manchester City in the spring.

The first South African to pocket an FA Cup winner\'s medal remained in dazzling form when the manager Joe Smith\'s tightly knit side hit their stride again in 1955/56, plundering a personal-best seasonal tally of 20 goals, including two hat-tricks in the space of a week, as the Seasiders came second in the title race to Manchester United.
It was Blackpool\'s highest ever finish, albeit 11 points adrift of the exceptional Busby Babes.

Perry was rewarded for his consistent excellence with a first full international call-up against Northern Ireland at Wembley in November 1955, when he set up a goal for Dennis Wilshaw of Wolverhampton Wanderers in a 3-0 victory.
Later that month he scored twice, shot against a post and made a goal for Bristol City\'s John Atyeo as England beat Spain 4-1, again at Wembley, and figured in a 1-1 draw with Scotland at Hampden Park the following April.

Though he had linked promisingly with his inside partner, the brilliant Fulham play-maker Johnny Haynes, he was replaced after his three consecutive appearances by Sheffield United\'s Colin Grainger and was never picked again.

As he moved into his thirties during 1960/61, Perry encountered knee problems which were to signal the begininning of the end of his tenure in the top tier.
Duly he became a fringe member of a declining side and in June 1962, having scored 129 times in 437 senior outings for the Seasiders, he was transferred to Fourth Division Southport for �3,500.
At Haig Avenue he featured for one season, then dropped into English non-League ranks and enjoyed a fleeting stint with the Australian club South Coast United.

Later he returned to Blackpool, making a success of a printing business, outliving all but the wing-half Cyril Robinson of his 1953 FA Cup comrades and modestly accepting a celebrity that never diminished.

Bill Perry, who has died aged 77, goes down in football history as the man who scored the winning goal for Blackpool against Bolton in the \"Matthews Final\"; the 1953 FA Cup Final. Stanley Matthews, the supreme winger of his era famed for his elusive body swerve, was trying for the third time for a winners\' medal, having been on the losing Blackpool side in 1948 against Manchester United and again to Newcastle United in 1951. He seemed to have the whole of English football and its fans - barring Bolton - behind him as he strove for what would plainly be the third and last time to win that medal.

And win it he did, appropriately setting up the decisive goal for Perry, although the achievement was somewhat vitiated by the fact that by then, with substitutes not allowed, Bolton had been reduced to nine fit men, with neither their left-back nor their left-half, who should have been countering Matthews, in a position to do so. That goal was in the last minute of injury time with the gallant but diminished Bolton team still level at 3-3 - they could hardly have survived extra time - when Blackpool who had only just equalised, were away again. Getting the ball level with the edge of the Bolton penalty box, Matthews waited for the hobbling left-back Ralph Banks and the centre-half Malcolm Barrass to challenge him. Matthews eluded Banks, while Barrass, on the fringe of the six-yard area, confronted him in vain. Matthews, shrewdly eschewing a pass to the hat-trick scorer Stan Mortensen, pulled the ball back beyond him, Barrass narrowly failing to make contact, and Perry struck it, not with his stronger left but with his right foot, finding the left-hand corner of the goal and sending the stadium into ecstasy.

Years later, Perry would tell Matthews\' biographer, David Miller: \"I had to hook it a bit. Morty said he left it to me, but that\'s not true, it was out of his reach. Ernie Taylor [the small clever inside-forward who had actually played a salient part in Newcastle\'s conquest in the 1951 Cup Final] changed the run of play. He didn\'t get the credit but he was the main man. I\'d contributed much more in the semi-final against Spurs. Of course, Stan was special, the ability he had. If a player had a choice of pass, me or Stan, they\'d give it to Stan, knowing he\'d get to the line and take two opponents with him. For speed I\'d beat him every time over 50 yards, but never over five, or 10 yards.\"

The victory inevitably overshadowed everything else in Perry\'s lengthy career. Standing 5ft 9ins and weighing 11 stone, he modestly insisted that he was neither fast nor especially skilful, but he was highly effective and a brisk opportunist. His hero was Liverpool\'s powerful Scottish international left winger, Billy Liddell.

Born in Johannesburg, Perry played for his hometown club, Johannesburg Rangers, from the age of 16 and signed for Blackpool at 19 in 1949. He made his league debut in 1950 and played for the Seasiders for more than a decade. His goalscoring record there was prolific: 119 in 394 appearances after a slow beginning in his first season; just five in 33 games. Subsequently he regularly attained double figures until his last season, 1961-62, with just two in 10 games.

In the 1955-56 season Blackpool finished second to Manchester United in the title race. Perry was rewarded with three caps for England - his father was a Londoner - the first against Northern Ireland in November 1955. In the second, later that month, he scored twice against Spain. His final England appearance was in a 1-1 draw against Scotland at Hampden Park in April 1956.

In 1962 he was transferred to Southport, then dropped into English non-league ranks. On retirement, he ran a printing business in Lancashire, but was reunited with the FA Cup after 54 years when the trophy was taken to Bloomfield Road as part of the build-up to the fourth round tie with Norwich City last January.

He is survived by his wife Jean and three daughters.

Brian Glanville, The Guardian (www.guardian.co.uk)
Season: 1962/1963 [Back to Player Stats]
The player made an appearance in the following games: