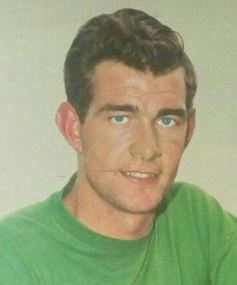 Alan Taylor only kept goal once during his school career operating mainly at full back. The change came when he joined Blackpool Rangers at 15.

He was unfortunate to be at Blackpool at the same time as Southport born Tony Waiters, the England international. After operating as understudy his breakthrough came in 1967 when Waiters retired. He replaced Kevin Thomas after only three games and held his place while the ‘seasiders’ finished third in the second division. He played 73 consecutive League games for Blackpool until the arrival of Harry Thompson from Burnley consigned him to the reserves.

After loan spells with Oldham Athletic (2 games) and Stockport County (2 games) he re-joined Jimmy Meadows at Southport. He possessed a good temperament and played 34 games in 1971-72. The following campaign he shared the goalkeeping duties with Peter Gregson to gain a 4th division championship medal, but as player of the year in 1973-74 he missed only one game to take his League career aggregate to 203. He later played junior football in Blackpool for a number of years.

After retirement he was a Sunday School teacher and ran a church youth club in Blackpool where he worked as a postman.