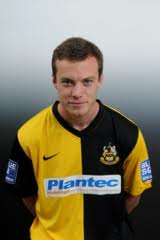 Liam Watson signed Wrexham winger Shaun Whalley on loan during the 2008/09 season. An exciting winger Whalley added strength to the squad during 'Ports final run in. Shaun, son of former Southport assistant manager Neil Whalley has Coca Cola Football League experience including his spell at Accrington Stanley. As a teenager Shaun played for Southport reserves and is familiar with Haig Avenue.
Season: 2011/2012 [Back to Player Stats]
The player made an appearance in the following games: