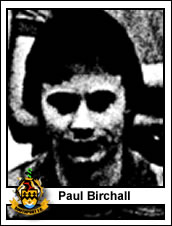 As a schoolboy he played for Liverpool Boys and Liverpool Juniors as well as the Merseyside Youth team. He was on Liverpool's books as a schoolboy from 13 and trained there until 17 and was briefly associated with Everton when he represented Lancashire County F.A. v.Westmorland. A promising midfield player, who never quite fulfilled his potential in a struggling Southport side, he was handicapped by a lack of physique and was unable to command anything like a regular place. His only goal secured a home draw against Barnsley on 27 December 1977. He had trials with both Blackpool and Cambridge United after the club failed to be re-elected. He had two further spells at Haig Avenue in the N.P.L.
and also assisted a number of other non-League clubs. Now living in Parbold, he is employed as a Quality Control technician.