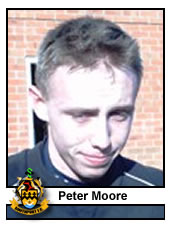 Came through the youth system at Wigan Athletic before being released in the summer of 2008.

Following an unsuccessful trial spell at Accrington Stanley, the 20-year-old joined Unibond First Division North side FC Halifax Town, where he put in some impressive performances before joining Joey Dunn's Warrington Town in January 2009. Snapped up by Liam Watson as cover during the run in.