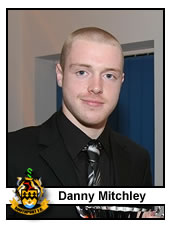 Mitchley played at Skelmersdale United until he was 15 years old. He then spent one season with the Oldham Athletic Centre of Excellence, followed by a short spell with Wigan Athletic's Centre of Excellence, before joining Blackpool, where he became a regular starter for the youth team in the Football League Youth Alliance, North West Conference.[1]

By December 2007 Mitchley had scored 25 goals in just twelve matches for Blackpool's youth and reserve teams, and despite only just having turned eighteen, Blackpool manager Simon Grayson stated that he was "not frightened of throwing him into the action if I need to." Mitchley had been training with the first-team squad and had already travelled with them when he was included in the squad that went to Scunthorpe United. Grayson also confirmed that Mitchley would be training with the first team over the Christmas period and that he was close to a first team call up. By February 2008, Mitchley had scored 35 goals for the youth and reserve team in the 2007-08 season. However, he then suffered a broken foot, which kept him out of action for the rest of the season.

On 4 March 2008 Mitchley was offered his first professional contract, together with youth-team captain, Ashton Bayliss. On 6 May he won two awards at the club's annual presentation night: the Blackpool Supporters Association Young Player of the Year, and the Chris Muir Memorial Trophy for Young Player.

He made his return from injury on 15 October 2008 in a reserve-team match at Burnley.[1] He was then included in the Blackpool squad for the first time in the Championship home match against Derby County on 21 October 2008, but was an unused substitute as the Seasiders won 3-2. Four days later, he made his professional debut when he came on as a late second-half substitute in the 89th minute for Gary Taylor-Fletcher at Bloomfield Road in a 2-2 draw with Crystal Palace.

On 27 March 2009, Mitchley signed for Conference North side Southport on loan for the rest of the 2008–09 season.[8][9] He made his debut as a substitute the following day in the Sandgrounders' 3-2 win over Stafford Rangers at Haig Avenue.