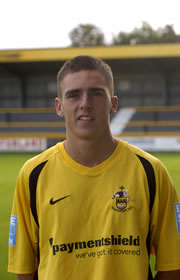 Signed from Trafford following a successful pre-season trial, Barnes is a former Bolton Wanderers trainee. The 19 year old Joined Flixton 2 years ago upon his release, trialling with Morecambe and Altrincham last summer before joining Ged Kielty's Trafford where he featured 36 times, scoring 2 goals.