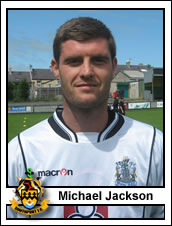 He played 31 times for TNS in their Title-Winning Campaign of 2006/07, but left the Champions to take up an offer to play for Throttur Reykjavik in Iceland.

He is a tall defender who signed for Rhyl from Southport in summer 2001 and played a part in their title success in 2003/4. He then had a short spell with the Saints in the 2004/05 season, making two starts and one sub appearance. He then signed for Welshpool Town before re-joining TNS towards the end of March 2005.