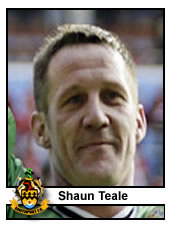 Shaun had two spells with the club, originally making his debut under Bob Murphy on the 10th March 1984 in a 2-1 home defeat to Matlock Town the game after a fellow member of the 100 Club, Rob Sturgeon made his debut. Shaun became a hot property and it came as no surprise when he was snapped up by Northwich Victoria and even less of a surprise when he moved to Bournemouth where he made 99 appearances before moving on to Aston Villa for whom he played with distinction for 146 games scoring two goals. He has also played for Tranmere 54 appearances, Preston on loan, 5 appearances, Motherwell and Carlisle. Shaun has also been the player manager at Burscough, Northwich and Chorley.
He describes his most memorable moment whilst at Southport as the Quarter Final of the FA Trophy when we lost to Kidderminster in a replay.
His second spell at the club was under Mark Wright in the 2000/01 and 2001/02 seasons and in total Shaun played 162 times with 9 sub appearances and he found the back of the net 9 times.
Whilst he was at the club Shaun owned a local fruit and veg shop. He now owns the Farmers Arms Pub & Restaurant in Burscough.
Shaun also managed Burscough to an unlikely FA Trophy Final success at Villa Park.

From a Villa fan about Shaun Teale:- �As a reasonably young Villa fan, albeit one with a rather geeky habit of watching old highlights on video, one of the very first players I ever admired properly was centre back Shaun Teale. Quite apart from the fact that his spell at Villa was preceded by time at AFC Bournemouth, my local club as a lad, and Weymouth, Teale�s ability and attitude combined to make him one of my all-time Villa heroes.
Shaun was born in Southport in March 1964. He played for Weymouth on the south coast for the first half of the 1988-89 season, after spells at Southport and Northwich, before moving a short distance along the coast to AFC Bournemouth in January 1989. In just over a hundred league and cup games for the Cherries he scored five goals. In July 1991, he made the move to Villa Park for �300,000 and began to establish himself as a legend.
I�m sure we all have different memories of Shaun Teale. He was, first and foremost, an excellent centre half. His tackling was no-nonsense but generally well-timed and effective, and his reading of the game alongside Paul McGrath made him an integral part of what I believe to be the best back four we�ve had in my lifetime, completed of course by Steve Staunton and Earl Barrett. Between �91 and his departure in �95, Teale also became known for his almost limitless tenacity and an undying willingness to get stuck in. Shaun Teale was a real hard man of football, and he�d be able to show the likes of Vinnie Jones a thing or two. In fact, I believe he probably has.
In our Coca-Cola Cup winning season, 1993-94, Teale was a hero. Torn shirts here, crunching tackles there, but always reliable. He scored in that wonderful Semi-Final Second Leg against Tranmere, for whom he later played, and was magnificent in the Final at Wembley against Manchester United. But then we all already know that, because we remember it.
In August 1995, not far shy of 200 Villa appearances with a few goals (and important ones at that) thrown in, Shaun moved on. He signed for Tranmere Rovers for �450,000. I don�t believe we�ve had a defender as good since.
As his career entered its twilight, Teale played for Preston, Chinese League side Sing Tao, Motherwell and Carlisle before appearing regularly for his hometown club Southport between 2000 and 2002. He went on to manage Burscough and Northwich Victoria. As Burscough manager, in his first season as a boss, he won the 2003 FA Trophy � the Final was held at Villa Park.
Shaun took over the manager�s post at Chorley in January 2005. Teale�s passion for the game is obviously as powerful as we all remember it. His loyalty to Non-League football, which gave him his foothold in the late eighties, is remarkable�� Shaun Teale. Legend.�
Player Profile reproduced with Permission from:
The Complete Non-League History of Southport Football Club 1978 - 2008, by Trust in Yellow (Legends Publishing, 2008). ISBN 978-1-906796-01-3

Catching Up With Shaun Teale