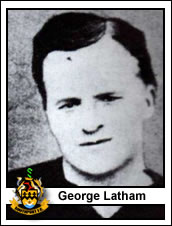 Latham began his career at his hometown club Newtown in 1897 before turning professional in 1902 after joining Liverpool, having previously had a trial spell with their Merseyside rivals Everton.

He made his debut three years later in an 8-1 victory over Burslem Port Vale on 8 April 1905 but never fully established himself in the team, making just 19 appearances in all competitions during a seven year spell at the club. After leaving Anfield, Lathom became one of the few bright features of 1909-10 for Southport Central. He was a full-back and a popular favourite with the crowd and became the first player to gain International honours while actually playing with Southport when he was capped by Wales against England.

“Undoubtedly the best wing half in the International at Wrexham on Monday was George Latham, one of Newtown’s sons. He gave a very creditable performance and is fully deserving of the honour conferred upon him of being again elected to represent Wales against England.”

“ENGLAND V WALES Craven Cottage
A few old Newtonians had a happy time at Craven Cottage on Monday. Several of them met outside the ground to see George Latham when the player drove up in a motor car. We gave him a good old cheer and shook hands all round. ‘Play Up Newtown!’ was the cry on the ground and we nearly shouted ourselves hoarse. George did play a game too, well worthy of the town.

He was a well-built fellow. He was well liked and would get on with anyone. His form saw him attract interest from a number of clubs and at the end of the season he was transferred to Stoke City.
Latham, who had previously served in the Second Boer War, was commissioned into the Royal Welch Fusiliers in the First World War and promoted to Lieutenant in 1916. He was awarded the Military Cross in 1917, for his gallantry in capturing enemy positions on the Turkish front while under heavy fire, and a Bar in 1918. It was during his service in the First World War that Latham first met his long time friend Harry Beadles.
After the war, he began a career in coaching and coached Britain’s 1924 Olympic team in the Paris Games.
But the highlight of his career has to be coaching the 1927 Cardiff City team that brought the FA Cup to Wales.
While serving as a coach Latham was forced into playing for the side in a 3-1 win over Blackburn Rovers in 1921, becoming the oldest debutant in the history of the club at 41. His spell at Ninian Park coincided with one of the most successful spells in the history of the club, including reaching the FA Cup final on two occasions, losing 1-0 to Sheffield United in 1925 before beating Arsenal 1-0 in 1927.
In 1936, Latham was seriously injured in a bicycle accident and was forced to give up his coaching role. He instead returned to his home town Newtown where he died three years later in July 1938 at the age of 58.
His home town club, Newtown later named their ground Latham Park in honour of him.
Career: Newtown (1897-1902); Liverpool (1902-1909); Southport (1909-1910); Stoke City (1910-1911); Cardiff City (1921)