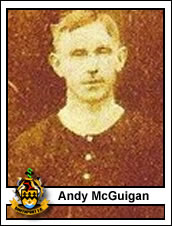 McGuigan was with Hibernian before going to Liverpool for the 1900-01 season. He was a forward who was at Anfield for just two seasons in the early 1900’s. He made his debut on 6th October 1900 when the Reds visited Derby County and scored 5 times in the 13 first division games he was selected for that year, enough to be eligible for a League championship medal, the club’s first Division One title. Liverpool slumped to 11th place a year later as they unsuccessfully defended their crown but Andy still contributed a goal every other game to give him respectable final figures for Liverpool of 14 from 32 league matches. He also played in four FA cup ties for the club.

McGuigan was the first player to score five goals in a league game for Liverpool against Stoke on 4th of January 1902.

Following his playing career he returned to Liverpool as a scout and later became a club director, serving on the club’s board when Liverpool won the championship two years in a row in 1922 and 1923.