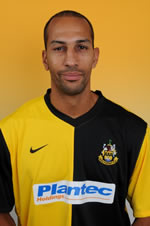 McNeil began his career with Stalybridge Celtic in 1999 and also played for Runcorn and Hyde United, where he was Hyde's supporters player of the year for two years in succession. Following a successful two-month loan spell, he signed a permanent contract with League Two side Macclesfield Town in June 2006, and made 35 league appearances in the 2006–07 season, scoring four goals. He was offered a new contract at Macclesfield but joined Stockport County in July 2007, where manager Jim Gannon said of him, "He has all the qualities we want. He's very strong, hard working and well equipped for his role."

He made 22 appearances for Stockport, scoring six goals, before injury interrupted his 2007–08 season. He returned to feature briefly in Stockport's final game of the season, coming on as a substitute for the final few minutes of their Wembley play-off victory. In 2008 it was rummerd that Mcneil was on his way to the canalside to join Reddish lads but the deal collapesed over wages.

He was offered a new twelve-month contract by Stockport, but the first half of his 2008–09 season also turned out to be plagued by injury. After being sent off shortly into the second match of the season, McNeil suffered a knee injury in training and missed the remainder of August, all of September and the first half of October. He returned to face Colchester on 18 October, scoring in the first half but being hospitalised with a head injury by a clumsy challenge in the second half. After a further month out through injury, McNeil returned to the first team for a spell of games in November, before a recurrence of a back problem forced him to limp out of the pre-match warmup for an FA Cup tie against Gillingham on 9 December, and spend the next six weeks on the sidelines.