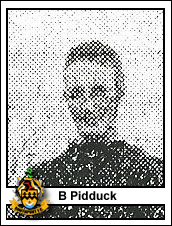 An Ironmongers Assistant for the family firm on Lord Street, he died at the age of 30 having been married for just 4 years.