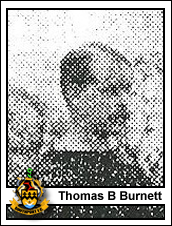 On 5th March 1877 He won his one and only international football cap, playing as Goalkeeper for Wales in their first ever home international match, losing 2-0 to Scotland.

In the Athletic News on Tuesday 14 September 1886, TB Burnett is listed as secretary of the club at 25 London Street, Southport.