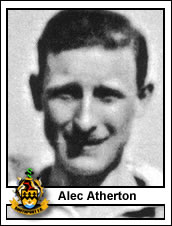 He attended Ducie Avenue High School, Manchester where he excelled
at all sports but particularly football and cricket. On leaving he worked
for Ferranti in Oldham playing amateur football. Married in 1939, he
obtained employment at Brockhouses and played for Southport Trinity.
Early in 1943 his work as an engineer took him to BICC who won the
Wycombe and District War League and the Subsidiary Cup. Returning
to Southport in 1945 he captained Southport Trinity and made a creditable
debut for Southport Football Club in 'war-time' football on To November
1945. The following week's F.A. Cup-tie with Oldham saw him suffer a
punctured vein which put him out of action for a while. In March 1947
he represented the I Zingari League against the Lancashire Amateur League.
Moving back to East Lancashire he started a children's clothing manufacturing business which he
and his wife ran for 20 years. A good left-handed batsman he represented Southport and Birkdale
C.C. and Cheetham Hill C.C. where he once shared an unbroken opening partnership of 266.
Moving to Chorley he played for Chorley C.C. where he reigned as Chairman for 8 years. Though shingles cost him the sight of an eye he subsequently took up boating on Ullswater. He died of stomach cancer at the age of 70.