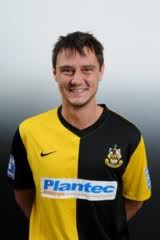 Born in Chorley, Grand started his career at Rochdale as a trainee in August 2001 and won the club's Young Player of the Year award in May 2002. He made his debut in a 2nd round FA Cup tie against Bristol Rovers in December 2002 and established himself in the first team, making 28 appearances in all competitions in the remainder of the 2002-03 season and helping Rochdale to the 5th round of the FA Cup in February 2003 where they were beaten by Wolves. He began the 2003-04 season in the first team and was a regular until January 2004 when, having made 21 appearances in all competition, he was dropped from the side following the arrival of new manager Steve Parkin. He made no further appearances for Rochdale and was released by the club in May 2004.

Grand joined Conference National club, Carlisle United, in August 2004, after a successful trial. He scored on his debut against Tamworth in September 2004 and made 29 appearances in all competitions in the 2004-05 season as Carlisle won promotion to the Football League. Shortly before the end of the season, he signed a two-year contract keeping him at the club until 2007. In December 2005, he scored the match winning penalty as Carlisle beat Tranmere Rovers 11-10 on penalties in the Football League Trophy. However, he found it hard to get ahead of Kevin Gray, Danny Livesey and Peter Murphy in the centre back position and made only 14 appearances in the 2005-06 season as Carlisle clinched a second successive promotion as League Two champions. At the end of the season, Carlisle were willing to listen to offers for Grand and, after making a further six appearances for Carlisle in the 2006-07 season, he joined Grimsby Town.

Grand joined Grimsby Town in January 2007, initially on loan until the end of the 2006-07 season but signing a permanent 18-month deal two weeks later. However, after making only seven appearances for Grimsby, he was released in May 2007.
[
Grand joined Football League newcomers Morecambe in August 2007 on a 12-month deal, after a successful trial with the Christie Park club.

After leaving Morecambe in the close season, Grand signed for Northwich Victoria on non contract terms in August 2008. He signed a permanent contract until the end of the 2008–09 season in October.