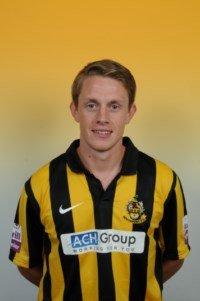 Having made a step-up of three divisions to join Southport, it is a credit to Steve’s talents as a defender that he started all but six league games in his first campaign with the club. Assured and reliable, Steve built on the promising reputation he developed at Skelmersdale United. After five years in Division One of the Northern Premier League, the chance to play in the Conference Premier is something the former Warrington Town defender has taken in his stride