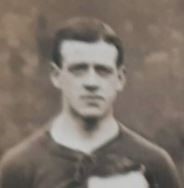 formerly of Arbroath.
Signed for Abroath from Dundee for a fee of £25 (which was appealed)