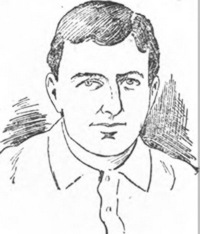 \"A member of the scholastic profession but his devotion to athletics proves that he is no mere bookworm. He helped to win the Oxfordshire Cup for Culham College. One of his distinguishing characteristics on the field is a repose of countenance which is never relaxed in the most strenuous moments of a match, his facial resemblance to that usually associated with the actor making the trait more pronounced. Perhaps as much as anything, Kelly\'s irreporachable methods have tended to make him the immense favourite he is. Whenever he secures the ball the expectant shout of \"Hi Kelly!\" is raised.
Usually the spectator is not disappointed and as an addition to he fleetness of foot he sends in a very decent centre.He is a dangerous man to opponents. As a marksman he is not consistent and one of his faults is an over eagerness to use his cranium. His footwork is tricky, and ability to swerve sharply with the ball when travelling at top speed has been cultivated to a high extent. He is of medium weight and height. To see him recover his feet after being bowled over is splendid testimony to his agility.\" (LEP, 20th December 1902)