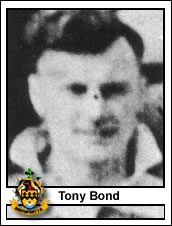 `A tricky, diminutive winger' is how the Lancashire Daily Post Football Handbook described him in 1934. Twelve years later this much-travelled player joined Southport. At Haig Avenue his 'first class' appearances were limited to the two-legged F.A. Cup-tie v. Oldham Athletic in which he appeared at outside-right on both occasions. He had begun splendidly at Southport, netting 8 goals in his first 5 matches and the club could have sold him for a good fee, but his early form was not maintained and he only netted once in four months before notching a hat-trick against Rochdale. A dislocated elbow a fortnight later seemed to ruin his confidence during the latter part of the season, though he was still second highest scorer with 12 goals in 29 matches. He played a lot of Lancashire Combination football, being associated with 5 different teams until turned 4o. After obtaining an amateur permit he had re-registered as a professional and played frequently with Preston before joining Southport. He was apprenticed at English Electric and worked at Dick, Kerr's and later Leyland Motors. Tony was the nephew of Dicky Bond, the Preston, Bradford City, Blackburn Rovers and England player.